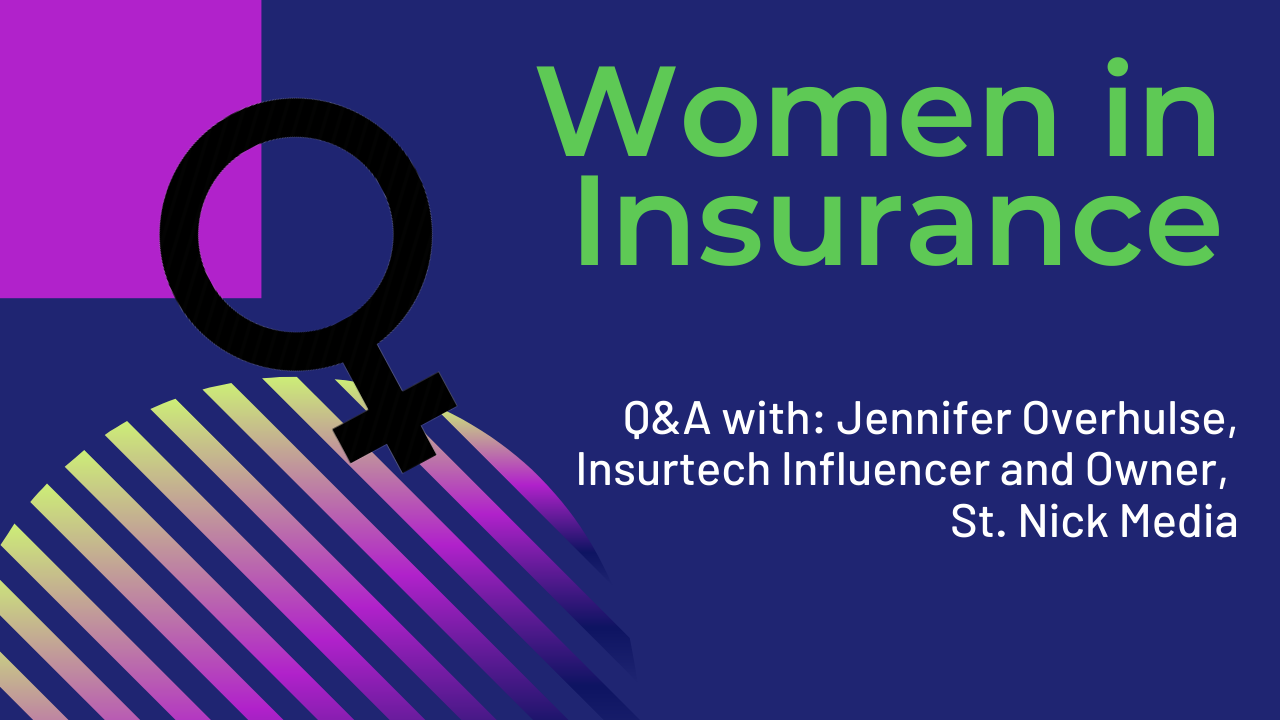 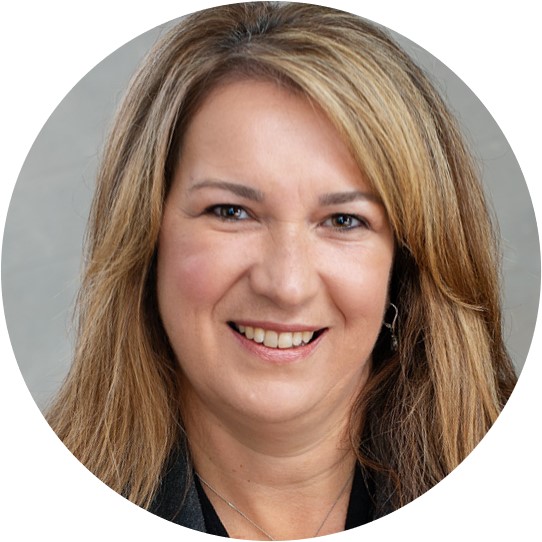 In this interview series, we profile women who are shaping the future of insurance. By highlighting their achievements and sharing their insights, we aim to have an open dialogue about what carriers, brokers, analysts, vendors and InsurTechs can do to promote greater gender parity and diversity in the world of insurance and increase the number of women in leadership positions. This week, we sit down with Jennifer Overhulse, Owner of St. Nick Media. Jennifer is an InsurTech influencer and a frequent roundtable facilitator, moderator, and featured conference speaker, presenting on insurance industry trends, changing insurance business models, procurement in the age of InsurTech, technology implementation strategies, social media for insurance, leadership, and entrepreneurship.

Jennifer, tell us about your path to insurance. What attracted you to the profession?

I’m one of those people who never meant to go into insurance. I actually got a degree in Journalism, most of one in Political Science, and most of one in Archaeology, none of which, I like to joke, will actually make you any money. So, I wound up working in marketing and copywriting for National Underwriter and when the company was sold to a VC, I left and parlayed my existing freelance clients in the insurance space into a full-time gig. Today, about 95% of my business is in the insurance industry and split between insurance companies, MGAs/MGUs, trade associations, established insurance technology vendors, Insurtech startups, a couple of accelerators, and the like focused on literally all segments, including life, P&C, and distribution channels.

What do you find most fulfilling about the work you do?

My position affords me a glimpse into many different segments of the industry. Most people just see the one thing they are working on from an “inside the company” perspective. They either know life insurance OR property and casualty insurance, not both. They either know the insurance company/carrier space OR the agent/distribution channel space, not both. The variation in my client base within the industry provides me at least a somewhat holistic view, and therefore, more of an opportunity to be able to identify trends which my clients can use in their favor. I like being able to position my clients as the canary in the coal mine, on the cutting edge of things instead of a behind the eight-ball, under pressure kind of thing. It’s fun to try to figure out what’s coming and how to meet and greet it effectively.

The insurance industry is in the midst of massive change. What do you think the insurance business will look like in five years?

Two or three months ago, I would likely have answered this question differently. Today, in the midst of a global pandemic, there really is only one answer for me… usage-based insurance (UBI). There are so many things that NEED to happen, but won’t to the degree that they should, like digital transformation. There are still companies that can’t provide remote access for work from home (WFH) employees because their legacy systems just can’t. There are companies still cutting paper checks for claims payments and who have no degree of mailroom automation. What’s up with that? The industry has to move toward digital, of course, but that won’t change the face of the industry on its own. It’s failed kind of miserably so far. However, for both life and P&C, consumers are about to demand on-demand or UBI. Think about it from where I sit… my cars and motorcycles have been sitting in the garage for weeks now. I’ve put no more than five miles on any given vehicle in any given week in the last month, so why am I paying for continuous coverage? This seems a simple question, but it’s not really. Not only do new insurance products have to be defined and introduced, but systems have to be overhauled in order to just bill on demand policies as opposed to operating on monthly batch billing cycles. And, UBI feels almost intuitive in the auto space at this point, but what does that look like for restaurants and bars? What about homeowners’ policies? Life insurance is leaning in the right direction lately by incentivizing good, healthy behavior, but overall insurance needs to do more of this in order to adapt. I hope, in five years, we are all only paying for coverage we need and that the premise of insurance coverage has become more about HOW we are using things and occupying spaces rather than WHEN. Lots of variables. Lots of choices.

The insurance industry faces a recruitment challenge with millennials choosing professions they deem to be more progressive, challenging and fun. What can insurers do to entice new talent?

Again, before Coronavirus, I might have answered this differently, but now I would say the insurance industry needs to emphasize the stability a career in insurance can offer. Natural disasters, manmade catastrophes, wars, terrorism, and infectious disease, all aside, insurance companies are still standing. Part of that is due to some banging contract language, high paid lawyers, and lobbyists backing them up, but part of that is due to the fact that everyone NEEDS insurance. Millennials can’t make ends meet playing guitar or waiting tables for a living. Retail holds little future for anyone, and as glamorous as a career in medicine may look on Grey’s Anatomy, none of it is as consistent as a job in insurance. I’m not sure it’s about being progressive, challenging, and fun, or if it is, maybe it shouldn’t be. I think enticing talent going forward will focus more on being stable and reliable and just not boring to the point of painful on a day-to-day basis.

According to a 2017 study, just 12 percent of insurance companies’ top corporate officers are women. Why do you think there are so few women in senior leadership roles in the insurance industry?

Having started my own company in the late 90s, I understand the challenges faced by today’s female founders. And, while women’s voices are much more accepted and respected in boardrooms and executive settings in corporate America today, there are still minds to be changed and glass ceilings to be shattered.

To illustrate my thinking on this topic, consider some fairly recent coverage of former presidential candidate Michael Bloomberg. I saw him being interviewed by Kasie Hunt of MSNBC who asked if he would name a woman as his VP if he happened to secure the Democratic nomination. While he noted that he likes Stacey Abrams, he said he thinks that Kamala Harris “seems like a competent woman.” That specific phrasing may not irritate anyone else, but from where I sit those are the ultimate “fightin’ words.” Kamala Harris is a former prosecutor, district attorney for San Francisco, attorney general for California, and a current U.S. Senator. Kamala Harris is not just a “competent woman,” she is simply competent. It’s exactly this kind of underlying prejudice (which most often goes unnoticed and uncorrected) that keeps women in general, and women entrepreneurs or executives in particular, from achieving at the same level as men.

In the insurance space, boardrooms, conference panels, and executive sessions have been dominated by men for YEARS. The phrase “pale, male, and stale” has been applied to more than one insurance gathering or leadership team with good reason. All that said, I’m not a man-hating, bra-burning feminist, and women do as much to hurt the cause as the men who have overlooked them or been promoted in their place by not performing to peak ability or allowing themselves to be thought of as victims of the system or the patriarchy. And, creating opportunities to further single out women or establish women-only environments is like putting a Band-Aid on a gaping chest wound. I don’t make decisions based on gender, nationality/race, religion, or any other demographic, but am instead a solid promoter of merit-based decision-making in all things. No one will catch me playing the “sisterhood” card if the sister in question is not the most qualified or the best-suited for the job. Get the education. Do the work. Raise the bar. Stop complaining about how badly the boys club treated you. The women who do that are the ones who will ultimately succeed.

Jennifer Overhulse is a writer, as well as a content and public relations (PR) authority, with an extensive journalism background and insurance expertise specifically related to trends driving the adoption and implementation of insurance technology (InsurTech), its impact on greenfield and incumbent insurance companies, distribution channels, startup partners, and the industry at-large. A former management team member for the Insurance Accounting & Systems Association (IASA), Jennifer currently leads the association’s InsurTech Strategy Track in the Technology Program, is a member of the IASA CI-TO Roundtable Committee, and she advises the Global Insurance Accelerator’s startup teams each year.