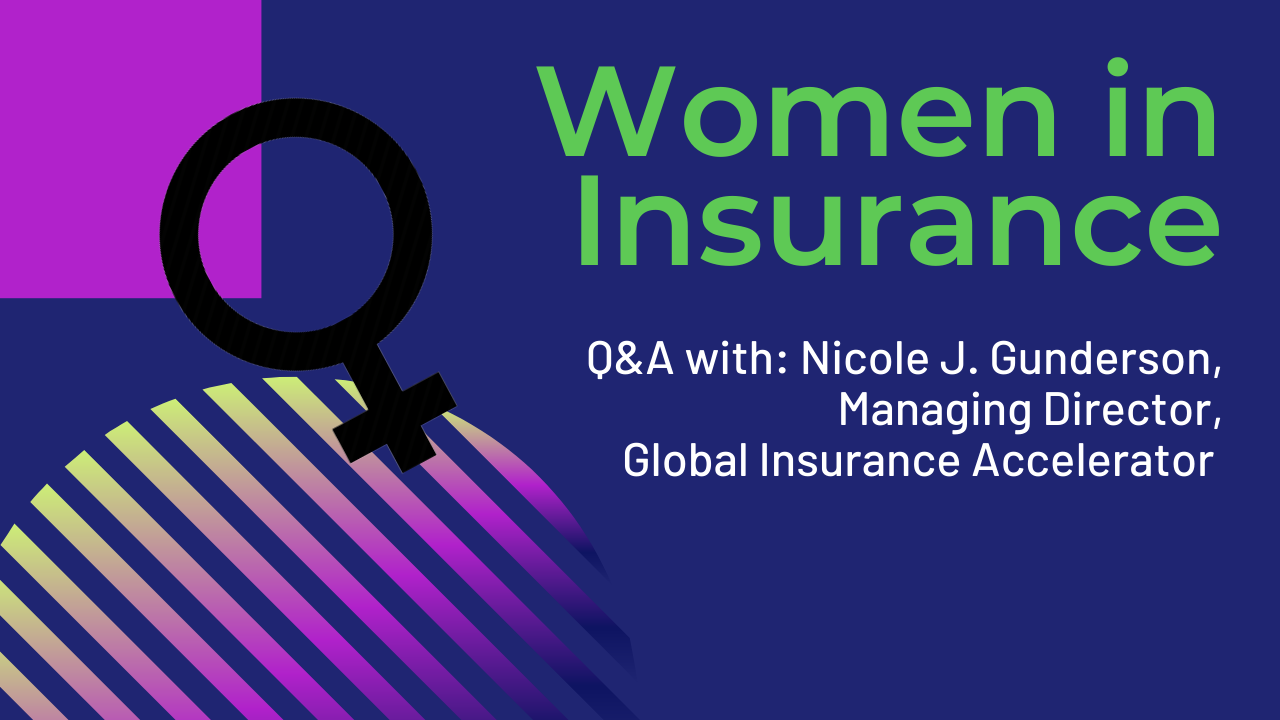 Nicole J. Gunderson is Managing Director of Global Insurance Accelerator (GIA), a mentor-driven business accelerator designed to foster innovation in the insurance industry by supporting insurtech startups targeting the global insurance industry. A proud Iowa native – go Hawks! – Nicole is responsible for the overall growth, development, and success of the GIA’s programs, as well as ongoing support of all the accelerator’s portfolio companies since its 2014 inception. Prior to the GIA, her career spanned finance, technology, startups, and investing. We caught up with Nicole to ask a few questions about her path to insurance and insurtech, how the insurtech investment landscape has evolved, and what insurance companies can learn from other industries when it comes to innovation.

Nicole, tell us about your path to insurance and insurtech. What attracted you to the industry?

My path to insurance and insurtech is perhaps a bit unconventional, and a little bit of a winding story, but here goes.

After completing a B.B.A. in Finance from the University of Iowa Henry B. Tippie College of Business in 2004, I got my career start in financial services, working in investment and corporate banking for BMO Capital Markets for seven years in the leveraged finance (New York), food (San Francisco) and financial sponsors (Chicago) groups, gaining deeply analytical experience.

Having grown up with entrepreneurial parents in small town Iowa, I made my transition to the startup world while completing MBA coursework at The Wharton School at the University of Pennsylvania when I joined venture-backed Dwolla in 2012 as an MBA intern, and, over the course of five years, grew to an executive leadership position as the FinTech company’s Vice President of Sales & Strategy. I helped lead the company transition from a consumer-branded payments business to a white-label ACH API platform, while also building the sales and customer success teams to support the B2B SaaS business model. While Dwolla had a HQ in Des Moines, Iowa, I spent the majority of my time based in San Francisco. It was in my last year with the company that I was making regular monthly trips to Des Moines and began getting a flavor for the ecosystem they were building.

I am also the Managing Partner of Five Island Ventures Partnership, an early-stage fund founded in 2012 and with pre-seed and seed stage investments, which include theSkimm, Seven Sundays, Anymod, Airlift Technologies, Patch, and Ruby Money.

Immediately prior to joining the GIA in February 2019, I worked with Speeko, an automated verbal analysis and speech coaching company, as Chief Operating Officer. It was my first foray outside of the financial services and FinTech industries where I collaborated with the company’s founding team during Techstars Chicago, focused on finding product-market fit, and developed a solid go-to-market strategy for Speeko.

It was in late 2018 when two different GIA board members who had known me and my career, which did not include insurance experience, reached out about the opportunity to join the GIA as its next Managing Director in Des Moines, IA. It would be the GIA’s fifth year of the accelerator program. After all these years away from Iowa, living primarily between New York and San Francisco, twice each, this represented an incredibly unique opportunity for me to bring all my experiences to date to support fostering innovation in the insurance industry, with a home base in Des Moines, IA. As I dug in, I got incredibly excited by the opportunity, as it mirrored what was happening a few years earlier in the financial services and fintech industries, and it was just the start with so much opportunity. With a then 14-year career spanning the finance, technology, and startup worlds, my experience in early-stage operations, fundraising, and investing proved to be the right formula for what the GIA was seeking.

You’ve been a trusted advisor to startups in the GIA accelerator program. How has the insurtech ecosystem and investment landscape evolved since the GIA started in 2014?

In the three years I’ve been with the GIA, I’ve been fortunate to lead four accelerator programs (including the current 2022 program), working with 32 portfolio companies. I also get to be a resource to the GIA alumni, so in addition to the 32, I’ve been a resource to another 26 companies.

My stated goal to the founders of the companies on day one of the program is to become their trusted advisor. It’s through this lens that I share three key observations from the last three years leading the GIA, comparing that to when the GIA got its start in 2014:

While the phrase, “the days are long, but the years are short” is what many insurtech founders feel of these observations, the evolutions themselves have occurred in a relatively short period for an industry that has been around for hundreds of years.

Insurance can be a world unto itself. As someone with a diverse background in finance, technology, startups, and investment, what can insurance companies learn from other industries when it comes to innovation?

I love this question. It’s actually one of the key reasons I was interested in joining the GIA in 2019, its fifth year. My early career was in financial services and FinTech, and I remember so clearly that as the first FinTech companies emerged, it was initially a question of competition with incumbents before it was ever one of partnership. Insurance and InsurTech had a similar arch and for both, it’s still early in the journey which is exciting for the potential that exists.

One of the valuable learnings that insurance companies can gain from other industries about innovation is the maniacal focus on the customer. This is how most successful, fast-growing, technology companies operate.

This also made me think of the first time I walked into Markel’s home office in Richmond, Virginia in 2019 and saw a sign, “Innovation is everyone’s responsibility.” I think they have that right. While it’s certainly helpful to have an innovation point of contact, one person can’t drive innovation for an entire insurer. And building a culture of innovation means everyone needs to feel empowered to say/do something.

What does a successful insurer/insurtech partnership model look like today?

I’m coming at this from the perspective of some of the earliest partnerships an insurer and insurtech company often do together: proof of concept (POC) or pilot. These are instrumental for early-stage (insur)tech companies when they are still finding product-market fit.

When all three of the below are met, the likelihood for partnership success* is much higher.

* To me, success is the willingness to try something new together, align on the desired outcomes, and if those outcomes are not achieved, while it might feel like a failure because the partnership doesn’t move forward to a commercial agreement, it’s a success because you tested and learned.

The insurance industry faces a recruitment challenge with millennials choosing professions they deem to be more progressive, challenging, and fun. What can insurers do to entice new talent?

There is a really prime opportunity right now to attract young talent into the insurance industry.

I was thrilled to meet Jelani Fenton, Founder of Safari, a career training and recruitment software platform built to help the insurance industry recruit and train the next generation of diverse talent. I asked him for his perspective on what insurers can do to entice new talent, and here is his response:

“At its core, insurance is a social impact product, and it needs to be marketed as such to prospective candidates. The insurance companies of the past have rebuilt communities after natural disasters and allowed families to build generational wealth. The insurance industry of the future will continue to serve this fundamental purpose while leveraging technology and creating innovative insurance-focused solutions to help address some of the biggest issues facing our world today, including wealth inequality and climate change.

Most young candidates have historically been unaware of the diverse career paths that you can take in the insurance industry. Historically, many professionals have “fallen into the industry,” however, many insurance leaders recognize the need for the industry to be more proactive and intentional about increasing awareness of insurance industry careers in order to attract a larger, more diverse and more competitive talent pool. With the rapid pace of change driven by incumbents and insurtech startups combined with an ongoing wave of retirements due to an aging workforce, the insurance industry provides a fantastic career path for young talent to make a positive impact immediately.”

What advice would you give the next generation of women considering a career in insurance or insurtech? 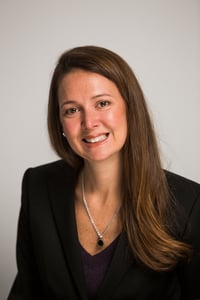 As Managing Director at the Global Insurance Accelerator, Nicole J. Gunderson is responsible for the overall growth, development, and success of the programs, as well as ongoing support of all of the accelerator’s portfolio companies since its 2014 start. Prior to the GIA, her career spanned finance, technology, startups and investing. She completed M.B.A. coursework at The Wharton School at the University of Pennsylvania and a B.B.A. in Finance from the University of Iowa Henry B. Tippie College of Business.